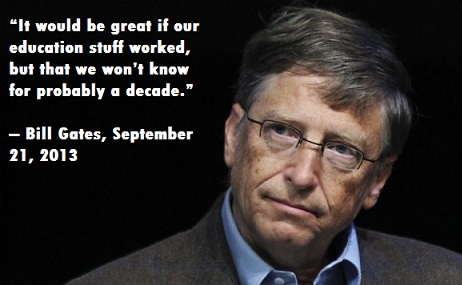 There have been dozens of reform plans proposed by various special-interest groups that want the state’s money for education, but which supposedly will loosen the state’s noose enough so as not to choke the members of the various groups. These reform proposals all have failed to change the public schools. The noose steadily tightens, or else the money is declared unconstitutional by the courts.

Every reform fails to reverse the steady decline of pubic education. Like a mastodon caught in the tar pits, the tax-funded system continues to sink. Once again, we learn, SAT scores have fallen. If anyone is surprised, he must have been educated in the public schools.

Tax-funded education offers parents free babysitting for 8 months out of the year. For this, parents must turn their children over to the state for indoctrination. There are also taxes. Most parents around the world cheer. “What a deal!”

Once the state persuades parents to surrender their children’s intellectual and moral training to the state’s self-certified bureaucrats, the march on the road to serfdom is simply a mopping-up operation. In principle, parents say: “Take our children.” Once they do this, the defense of private property is undermined at the core.

Second amendment defenders say: “You can have our kids, but not our guns.” The state replies: “Since we have your kids, your guns are marginal.”

With this as background, consider the dilemma of Bill Gates. He spent $3 million to promote a charter school law in the state of Washington in 2012. It passed in a close election. The state supreme court just declared it unconstitutional, 6 to 3.

Why? Because the state does not appoint the boards. The state taxes residents to pay for the schools, and then the rich and well-connected send their kids to it. The state bureaucrats don’t get to dumb it down in tenured, high-paying jobs. The bureaucrats rebelled. The court agreed. It agreed with the teachers’ union. In principle, the court declared this: “The same third-rate education that the average resident must endure must be endured by all residents who get state subsidies. That’s democracy.”

The solution is the Gates-funded Khan Academy, which is free to all families, all over the world. Gates persuaded Khan to adopt Common Core standards by providing a curriculum support team, although Khan did not use Common Core for his original math video lessons. But this is online education. It does not provide free babysitting. A parent must stay home to be with the kids. This is considered an intolerable burden by the rich, who donated money to the 2012 charter school campaign. One of them is the widow of Sam Walton.

Online education is a low-cost, high-standard alternative. But it requires parental presence, and it does not offer football or pom-pom girls.

“Unthinkable!” shout tens of millions of American parents. In a world of people trained in public schools, this really is unthinkable.

The rich want tax-funded alternatives. They promote school vouchers. The voters vote down these programs, and if they don’t, the courts do. I first heard the idea proposed by one of Milton Friedman’s followers in the summer of 1962. It was fantasy politics then, and it still is.

Here’s the deal: if you want your child out of the state’s children trap, don’t take state money.

With respect to public education adopt this phrase: “Not yours to capture.” Or this: “Replacement, not reform.” Or this: “He who pays the piper calls the tune.”

If you don’t think public schools are a children trap, read private school entrepreneur Robert Thoburn’s book, The Children Trap. I published it in 1986. You can download it free here.

If you want noose-free education, sign up for the Ron Paul Curriculum. It is self-taught above grade 3. It is video-based, just as the Khan Academy is. But, unlike Khan, it rejects Common Core. Here are 26 reasons to sign up today.