The mother of an eight-year-old wants to know why a Tennessee school teacher gave her child a handout from the Nation of Islam that portrayed the presidents on Mount Rushmore as being racists. 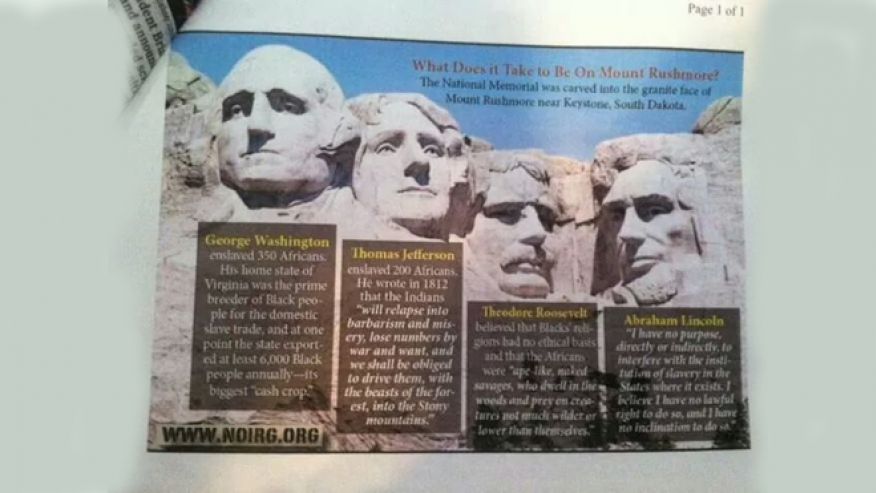 Sommer Bauer tells me her son was given The Nation of Islam handout at Harold McCormick Elementary School in Elizabethton. The handout asked “What does it take to be on Mount Rushmore?”

The handout then explains that George Washington hailed from Virginia, a “prime breeder of black people.” Of Theodore Roosevelt, it was alleged he called Africans “ape-like.” There were also disparaging remarks made of Thomas Jefferson (he enslaved 200 Africans) and Abraham Lincoln.

I’ve interviewed Sommer at least a half dozen times. Her story has remained consistent. The teacher gave Sommer two explanations for what happened in the classroom. The superintendent gave me a third.

She said her jaw dropped when she followed the link to a website that was listed on the handout. Imagine her surprise when up popped the Nation of Islam home page.

The Nation of Islam believes there is no God but Allah. They also aren’t all that keen on white folks or Jewish folks.

“It raised a number of red flags,” she said. “They are basically saying our Founding Fathers are racists.”

Sommer told me she reached out to the teacher for an explanation – hoping it was an honest mistake.

“At first, she did not recall which paper it was,” she said. “Later in the day, she found the paper and told me she didn’t like what it said – and said she must have printed it by mistake.”

The teacher also told Sommer that her son was not supposed to take the Nation of Islam handout home. It was supposed to stay in the classroom. That bit of news caused her great alarm.